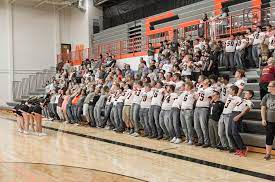 The Sibley – Ocheyedan Homecoming pep rally was held on September 9, 2022, at 1:30 PM. The pep rally was originally planned to be held on the football field, but due to the weather, it was held in the gym. All students from elementary, middle, and high school were in attendance. Parents and staff members were also invited.

The homecoming court was recognized along with the homecoming king and queen. All of the fall sports players were also recognized including football, cross country, and volleyball. All of the coaches gave recaps of the year so far, and what the future holds. The cheerleaders led the crowd in many different cheers. The court planned new activities that included games which included students and staff from all of the levels within the school district.

Following the pep rally, there were many more fun events planned. Some of the events included the parade and the homecoming football game. Students and staff stated that they thought the day was very enjoyable.