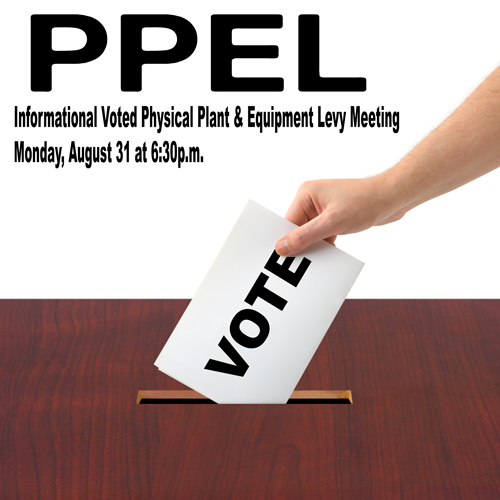 There will be a informational Physical Plant and Equipment Levy (PPEL) Fund meeting on Monday, August 31 at 6:30 pm in the Sibley-Ocheyedan Middle School IMC.

BACKGROUND:
The Sibley-Ocheyedan Community School District
has not had the Voted Physical Plant and Equipment Levy (PPEL).  The voted PPEL provides important
“maintenance” funding to repair roofs, playgrounds, and sidewalks; remove
asbestos; purchase equipment such as school buses and music instruments;
support classroom technology; and more.  Well-maintained schools are an essential
part of the educational process.

When is the community vote on PPEL?  On Tuesday, Sept. 8, 2015, Osceola County
residents will be asked to vote on the Physical Plant and Equipment Levy.  Polls will be open from Noon to 8 p.m.

How much does this levy generate and
for how long?
The maximum length of the levy is
10 years.  The levy would generate
approximately $193,387 annually for the 10-year period.  After the 10 years, the district may ask
the voters to approve it again.

Does the district currently receive
PPEL dollars?  Yes, we have the board approved PPEL
which has a limit of 33 cents per $1,000 of taxable valuation.  This generates approximately $95,000
worth of funding.  The Board is
asking for the equivalent of 67 cents to bring the levy to an even $1.

What will be the effect of the VPPEL on
my property tax?  For a home with a taxable valuation of
$50,000, the property owner will see an increase of $4.98 total.

What will be the effect of the VPPEL on
my income tax?  For an individual that has an Iowa tax
liability of $1,000, the VPPEL income surtax would add an additional $40 to the
tax liability.

Because of recent school district
budget deficiencies, why isn’t PPEL used to offset the general fund? PPEL cannot be used for salaries,
textbooks, or educational programs. The requirements to use these funds are
very specific to maintenance and equipment.

What are examples of the types of
things the levy can be used for? PPEL funds can be used for technology such as computer
replacements, transportation (buses, vehicles), musical instruments, roofing
replacement and repair, masonry repairs, energy conservation improvements,
concrete and asphalt repairs, other equipment, and remodeling projects.

What happens if the levy does not pass? Some projects and purchases still need
to be completed and will have to be funded by other options such as the general
fund, where 82 percent is dedicated to salaries. The district will struggle to
meet the maintenance requirements of our schools.

There will be a Voted
PPEL informational meeting Monday, August 31, 2015 beginning at 6:30 p.m. in
the middle school IMC.

Where can additional information be
obtained about PPEL?
Contact Bill B. Boer, Superintendent; or Kindra
Reiter, Business Manager, at 712-754-2533.