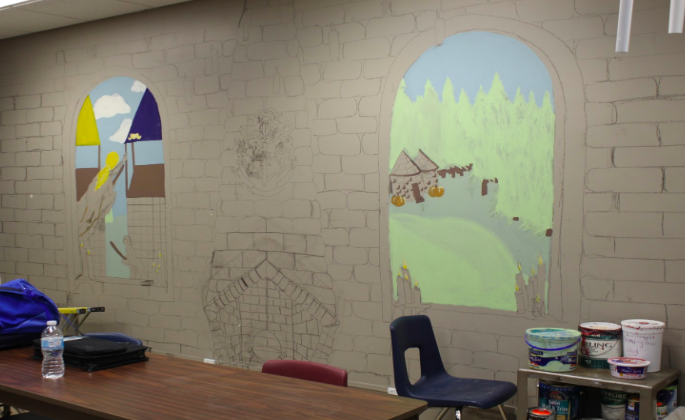 If you have Mrs. Maria Mans as a teacher this semester you might have realized that she has a rough sketch of a scene on her wall. This is going to transform into a mural of a Harry Potter scene. Senior Katherine Walton is completing the mural scene for her Advanced Visual Studies Art Class.

Mrs. Mans’s goal is to have the mural done sometime before students leave for Christmas break. She has always wanted to have fake windows, so when Katherine approached her with the idea of doing faux windows she was very excited. Katherine drew out the design and turned it into an amazing mural based on the book series Harry Potter. Mrs. Mans wanted to incorporate herself playing Quidditch into the design as well as having members from the houses of Hufflepuff and Ravenclaw included.

Katherine has taken many different steps to get to where she is right now on the mural. She started off by going to Mrs. Mans and asking her if she wanted a mural done. Then she proceeded to ask her for different ideas of what she would want to be done. After collecting Mrs. Mans’s ideas she made a rough sketch of her idea for her design. She then went back to Mrs. Mans and got her feedback on the sketch. After that, she took roughly one and a half months to design the final sketch and decide how she wanted to complete the mural. After she got her final design she had to go get approval from Mrs. Mans, Mr. Craig, and Mr. DeZeeuw. Once she received everyone’s approval she then projected the sketch onto the wall with an opaque projector. When that was finished, she then began the painting process.

Walton is currently painting the mural and is expecting to be completed sometime around the end of November or early December. She is doing this scene as her final senior project. The idea is for her to leave her mark on the school in some way that will last long after she graduates. In the past seniors have painted a ceiling tile in the school somewhere, but Katherine wanted to do a mural instead and got everything she needed for it to be approved.