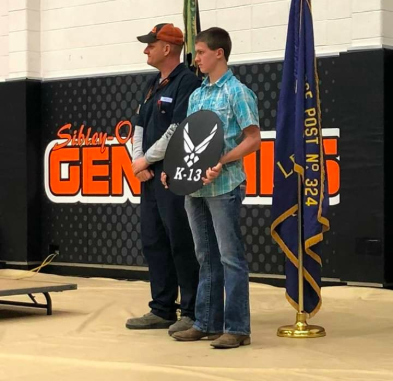 On Monday, November 11, the Sibley – Ocheyedan Future Farmers of America (FFA) Chapter hosted their annual Veterans Day Program in the high school gymnasium. To begin the program, Pastor Doug Noonkester (the pastor of the First Baptist Church in Sibley) offered a prayer. The program included a select few elementary students from Mrs. Schuller’s fifth-grade class, who demonstrated what they had learned about how to properly fold an American flag, while others spoke about their interviews with veterans.

Air Force Staff Sergeant (and S-O transportation director) Amos Kleinwolterink then presented a speech. He told the people who attended the program about his life and what led him to join the airforce.  He shared that in he was stationed in Kadena Air Base in Japan. It was the “Keystone to the Pacific.” He stated that he loved serving his county. After his service, he decided that he wanted to move back to Sibley to be nearer to the family. His speech emphasized that “…there are only two ways to do something; either the right way or the right way.”

Kleinwolterink thoughts on the day’s ceremony included, “The program was great, with the community coming together to support the veterans.” His advice for those who want to join the military is to just do it and not to overthink it.