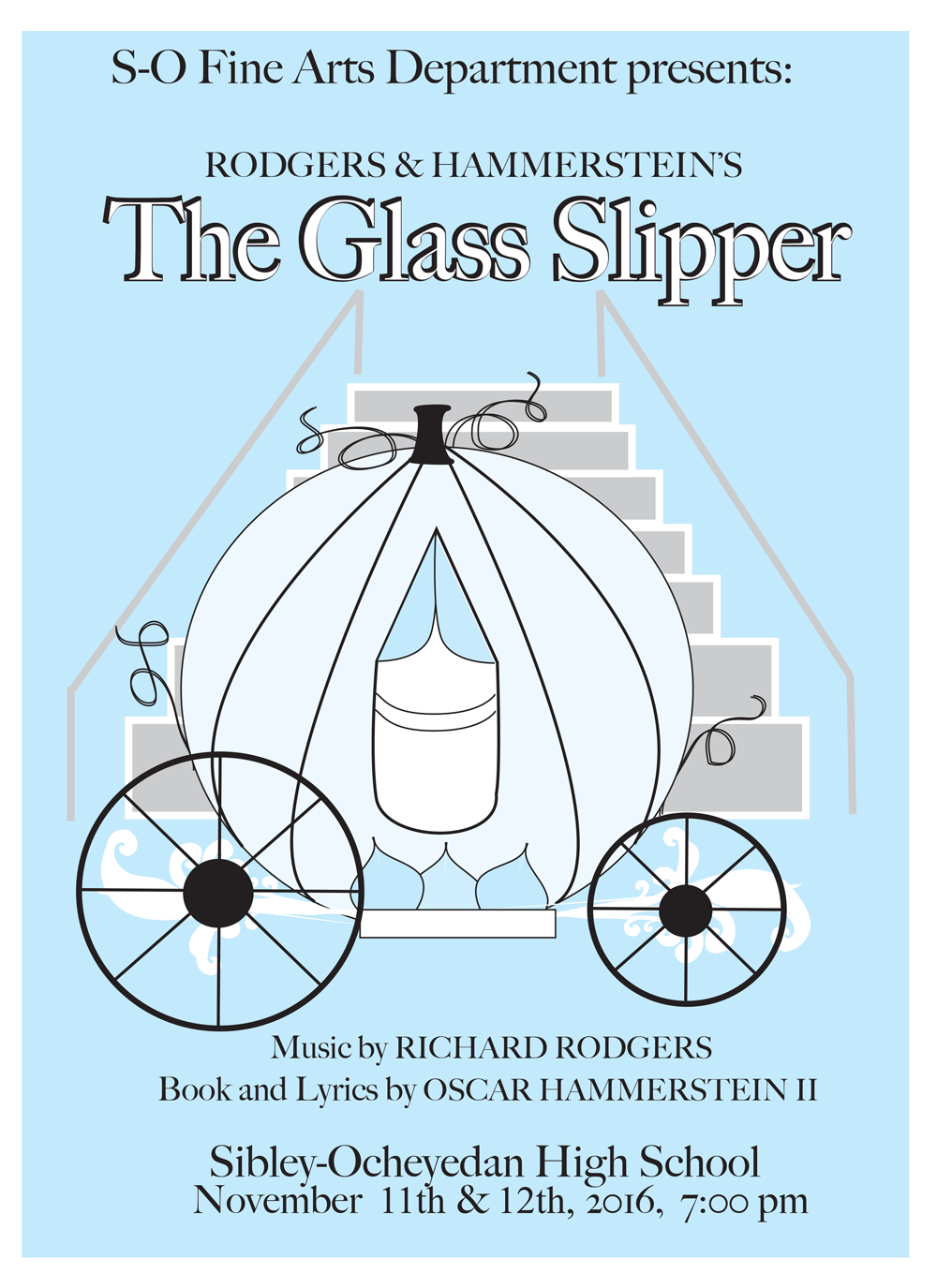 Make plans now to come one, come all to the Sibley-Ocheyedan fall musical, “The Glass Slipper” on Friday and Saturday, November 11 and 12, 2016.  The production will be in the Sibley-Ocheyedan High School auditorium with a curtain time of 7:00 p.m. both nights.  The musical is an adaptation of Rodger and Hammerstein’s, “Cinderella” in two acts.

A total of eighty-one Sibley-Ocheyedan students make up this year’s cast and crew; they are (in order of appearance): Ella –a hopeful peasant woman determined to better the kingdom and find true love played by Andrea Meyer, Topher –a lost and misguided prince played by Jacob Schultz, Jean-Michel – a determined revolutionary played by Benjamin Wollmuth, Gabrielle – Ella’s quietly caring stepsister played by Afton Grady, Charlotte– Ella’s self-centered stepsister played by Britta Harberts, Marie – a friend to Ella and also her fairy godmother played by Jada Carlson, Madame – Ella’s vain and materialistic stepmother played by Kailey Schmidt, Sebastian – the kingdom’s Lord Chancellor played by Ben Jacobsma, and Lord Pinkleton – the town crier played by Joshua Nobles.  The fall show is under the direction of Mr. B.J. Schuller and Ms. Chloe Peterson

The story takes place in Prince Topher’s kingdom where his Lord Chancellor, Sebastian has been making big decisions that have taken homes and possessions away from the poor peasants in the kingdom. Jean-Michel begins to speak out about cruel actions of the prince and his right-hand men. As a distraction, Sebastian plots to give a ball to find the prince a bride. Meanwhile, Madame, Gabrielle, and Charlotte prepare for the ball as poor Ella is forbidden from attending. Thanks to Marie, Ella is given a spectacular opportunity. This fairy tale is promised to be fun and entertaining for all ages.

Tickets are $7 per person, and there are no reserved seats for the production.  For more information, contact Mr. Schuller at the high school (712) 754-7222, or email at bjschuller@thegenerals.org.  The fall musical is produced in cooperation with R&H Theatricals, 601 West 26th Street, Suite 312, New York, NY, 10001.