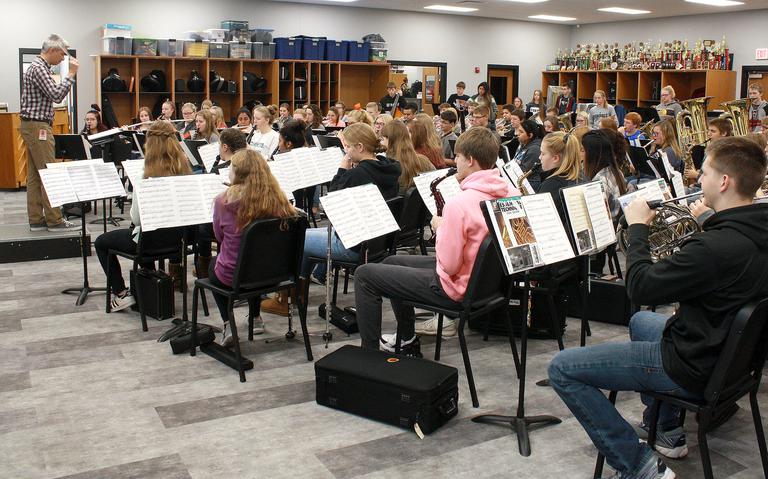 The S- O Jazz Band will travel to Estherville on January 24, 2020, to participate in the ILCC Jazz Band Contest. The jazz band is playing three songs this year that include: “Alianza” by Erik Morales, “Out of the Doghouse” by Erik Morales, and “A Quiet Heart” by Pete McGuinness. Last year the jazz band placed in the top 3 in all of their competitions, had a division rating of 1 and won the 2018-2019 Coyote Jazz Festival held annually at the USD campus in Vermillion, South Dakota.

Peter Carlson, the jazz band instructor, was interviewed about the competition and about his thoughts on how the jazz band was doing. He was asked for his opinion on the songs that he chose for this year’s group. He responded by saying that he wanted to find songs that the members would like. He was also asked if he thought the band was ready for their first competition. He answered that he thought they weren’t yet. The next question that was asked was which song was his favorite. He responded by saying that it was too early to tell because they hadn’t been to a competition yet. The final question that was asked was about his expectations for this year. He answered by saying that he expected the group to play and that when they play, the members will see results.

Dalten Bremer, a senior, was interviewed about his thoughts on jazz band. Dalten was asked how many years he has been in jazz band and he answered saying that this was his fourth year. The next question that was asked was if he liked jazz band and why. He responded by saying “yes” because jazz is a fun style of music to play. He was also asked for his opinion on the songs that were chosen. He answered saying that he thought all of the songs showcase the different styles of jazz. The final question that he was asked was if he thinks the jazz band was going to do well at the competition. He responded by saying that the band has the potential to do well.